Nundroo has the largest population of Southern Hairy Nosed Wombats in Australia. Their isolation has shielded them from many diseases threatening the species in many other parts of Australia.

Regular surveys are done around Nundroo and it is estimated over 2.5 million wombats inhabit this area.

Even though these wombats pose a threat to farmland and are regularly hunted by the indigenous population, their numbers appear to unthreatened.

The tee has been named after the Karinkabie Well, seen on the hill in front of you to the right. This well was established with the first settlers and is some 150 years old.

The well was used up until recent times by the Nundroo Roadhouse before becoming too salty for general purpose use.

Old ruins lie around the well where there used to be a house and a vegetable garden used by one of the first settlers. The name is unknown. 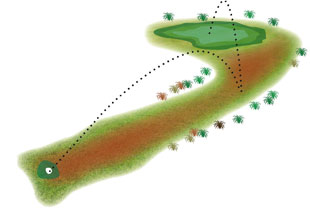